This year marked the 20th anniversary of the September 11th attacks in the United States. Erin Bowles remembers where she was on that day. Erin had just stepped into her supervisor role at Wheaton Franciscan Healthcare about two or three months before. She was tucked away in a room, attending a training led by a few nuns who held administrative positions at the hospital. As she was learning how the whole healthcare system came to be at Wheaton, a few of the nuns got word of what happened and rolled in a TV to watch the fateful events of September 11th, 2001 unfold. Years later, Erin Bowles would become the Wisconsin State Lab of Hygiene’s coordinator for the Wisconsin Clinical Laboratory Network, which was born out of public health’s response to 9/11.

The Wisconsin Clinical Laboratory Network (WCLN) is part of the Wisconsin State Laboratory of Hygiene’s public health response to the federal government’s anticipation of and preparation for bioterrorist attacks following 9/11. The CDC allocated federal funds to public health labs (PHLs) nationwide, indicating that PHLs should get to know the clinical labs in their state and their testing capabilities. Today, the aim of the WCLN encompasses emergency preparedness, disease surveillance, laboratory diagnostics, training and education, and communications. What ultimately drew Erin to working as the assistant WCLN coordinator at the Wisconsin State Laboratory of Hygiene (WSLH) was her passion for education, public health, and microbiology. 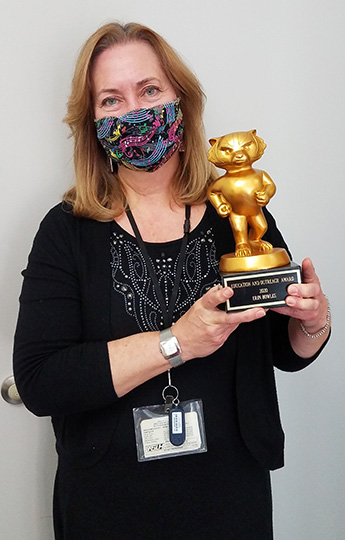 As a clinical lab professional, Erin participated in the WSLH’s Virology and TB Networks. She remembers the first outreach to the clinical laboratories when Pete Shult, then director of the Communicable Disease Division (CDD) at WSLH, and Carol Kirk, the original WCLN Coordinator, developed the WCLN.  When the WSLH was hiring an assistant WCLN coordinator, Erin was intrigued. Erin actually heard about the job through a fax that came across her desk; as many of us may remember, this was during a time when fax machines were more commonly used than today.

“When I saw the announcement, I thought hmmm…,” said Erin with a laugh. “I was really impressed by Carol and Pete and what they were doing at the State Lab. The people here are so passionate about what they do. I love being in public health and thinking about the big picture.”

Now, as the coordinator of the Wisconsin Clinical Laboratory Network, Erin works with more than 130 member clinical laboratories throughout the state, visiting and connecting with labs to provide meaningful guidance and support. This has been especially important during the pandemic.

Before the COVID-19 pandemic, Erin really enjoyed travelling around the state meeting with WCLN members in their own laboratories to build or maintain relationships and providing educational events, such as Gram stain wet workshops. These wet workshops address the fact that while many of the clinical labs these days are referring most of their microbiology testing to a central laboratory within their healthcare system, or to a reference laboratory, they still need the vital skills required to perform a good quality Gram stain.  It is important to keep practicing these more traditional microbiology methods, even as we work more and more with rapid testing methods. That is why Erin says WSLH Proficiency Testing’s Bioterrorism Preparedness Exercise (WSLH PT Clinical Catalog, page 35) is really important for any clinical laboratory in the United States and beyond to practice.

“It is one of the most important exercises we can provide clinical labs because laboratory professionals do not often get to see these agents, to isolate and identify them. If they are not constantly reminded of certain checkpoints, they forget and exposures occur,” Erin says.

Since microbiology has changed (and for the better) to much more rapid methods, lab professionals may not be sufficiently practiced in some of the more traditional microbiology methods necessary when dealing with some organisms. Exposures are most likely to occur when these checkpoints are missed.

“You may not routinely Gram stain an organism before you put it on a more rapid identification system. In doing this, you may emulsify the organism while working on the open bench. You’ve probably just created an aerosol which would be an exposure,” said Erin. “When you conduct a bioterrorism preparedness exercise, it makes you more aware and reminds you to think more mindfully of those checkpoints.” 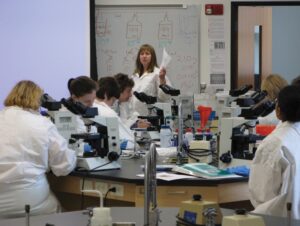 “Slow growth is still a very important indicator that you’ve got a particularly nasty bug,” Erin emphasizes. “It’s a really good exercise that should be practiced a couple of times a year, and it’s a great way to train new employees.”

Whether you are a clinical laboratory in the state of Wisconsin or beyond, the WSLH aims to provide support in a variety of ways. Through her committee work for the Association of Public Health Laboratories (APHL), Erin has been able to work on projects that support clinical labs throughout the United States on topics such as emergency preparedness and biosafety. In 2017, Erin was nationally recognized by APHL as an Emerging Leader. Some of the projects she has worked on are the revision of the American Society for Microbiology (ASM) Sentinel Level Clinical Laboratory Guidelines’, “Definition of Sentinel Clinical Laboratories”, the creation of the APHL “Clinical Laboratory Preparedness and Response Guide”, and the development of various sections within the “Competency Guidelines for Public Health Laboratory Professionals: CDC and the Association of Public Health Laboratories”.

Erin is thankful for the opportunity to work with the sentinel hospitals and clinical laboratories in Wisconsin that are often the first to recognize unusual infections or outbreaks and alert public health officials. Erin thoroughly enjoys her work maintaining and supporting the WCLN and feels fortunate to be allowed to contribute to public health national initiatives through her work with APHL.

Erin Bowles is an amazing leader in public health and WSLH Proficiency Testing is grateful to share an office with her. Erin is a wonderful resource and wealth of knowledge for WSLH PT staff, as we share in our work for educational outreach and laboratory quality.