Recently, our outreach coordinator, Megan Flowers had an opportunity to sit down with Dr. Dan Kurtycz, who has served as medical director for the Wisconsin State Lab of Hygiene (WSLH) since 1998. Dr. Kurtycz or, “DK” as his students call him, will be retiring at the end of this year. Before he sets sail for his retirement years, we wanted to gather his reflections on his time in the medical community and in the world of proficiency testing through his eyes as medical director for WSLH, the public health lab which is the home of WSLH Proficiency Testing. Below you’ll find an excerpt of the interview Megan had with DK and some of the fascinating conversations shared.

Megan Flowers: How have you seen the world of proficiency testing change since you began your career? 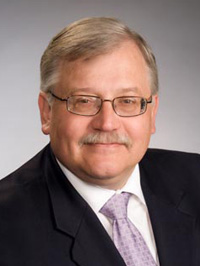 Dan Kurtycz: It’s really come a long way since I started out as a junior pathologist. There were about a dozen proficiency testing providers during the time of my residency where they would start sending samples out of known concentrations and got to see if laboratories would get the same answers. People began complaining, well, you weren’t testing properly and my method is better; so, you began to start seeing controversies.
When I finished residency, there was a program run by the College of American Pathologists called QAS today, where you would send samples out to people and you would test them and give them an answer in their peer group. I was involved in this program as a junior pathologist, and had signed up with CAP to help them. We were in charge of a region where we reviewed everyone’s numbers and notified them when they failed or when they were too far out.

What constitutes being too far out? Dr. Jim Westgard was really important in all of this.  I actually did a fellowship with Dr. Westgard around 1983. Dr. Westgard had involved these things called control rules. If you are running a series of controls with relatively good tolerance limits there is a bell-shaped curve of results that people are going to get. Within this bell-shaped curve, you want everyone to be within at least your results within at least 95% acceptance limits, which by the way is a much higher success rate than what clinicians do when they are diagnosing patients. Westgard evolved a series of rules based in part on 95% confidence limits, 2 standard deviations out from a mean. Westgard’s control rules became very important in the literature and then became built into the machines.  For example, if you have one error in which everything is on one side of the mean then that is likely a systemic error and something is likely wrong with your machine’s calibration or the reagents you are using. Westgard’s series of rules became very important and was promulgated across the nation and around the world from right here in Wisconsin. Everyone was building his methods into their day-to-day practice. I really learned a lot from Dr. Westgard and the whole bevy of people who got involved in Westgard rules and helping refine them.

MF: In the case of the Wisconsin State Lab of Hygiene, what is the significance of having a public health lab also operate as a proficiency testing provider, that entity being  WSLH Proficiency Testing?

DK: Having a division of our lab focused on providing proficiency testing programs was from my predecessor’s efforts, Dr. Ronald Laessig, who was the Medical Director of WSLH at the time. It was important for WSLH as a national public health lab to outreach and provide support to clinical labs on all fronts, including helping labs improve their patient testing through proficiency testing. This was at the same time Laessig was working with Westgard to expand improved methodology and machines. Historically I’ve been more involved with CAP, since I work with CAP as the Medical Director of WSLH. However, what makes WSLH Proficiency Testing stand out in the world of proficiency testing is the ability to provide personable, one-on-one consultations when the laboratory professional needs it. That means a lot.

MF: What advice would you give clinical laboratories regarding their approach to proficiency testing today?

DK: Well, it’s not only about getting the numbers right. It has to be a part of a whole quality assurance program. They have to pay attention to everything from the pre-analytics through the actual testing, running the controls, and to the post-analytics. Quality isn’t only just about making sure your controls are in nowadays. The biggest errors in the laboratory are clerical, where we mess up, don’t track the specimens, and don’t get the right answers to the right people. Also, as laboratory professionals, we need to make it as easy as possible for the clinician to get what they need to take care of people. We tend to run our laboratories as factories and we forget sometimes about the patient at the end of every sample, including those proficiency testing samples that, in the end, help us better alleviate a patient’s suffering. We are not isolated in this work. We are part of the medical community. Let’s not forget the important work we do.